EFB and IT Consulting

Our approach goes beyond software on a single device.

Preparing your environment for an Electronic Flight Bag is a complex job, but we can help you with our experience in IT infrastructure services. Our agile project management facilitates interdisciplinary collaboration with your IT department and pilots. Thus you we’re able to improve work processes and communication between all involved stakeholders.

For more than 20 years, we are realizing IT projects for medium-sized enterprises and large corporations in Germany and abroad. For more than 12 years we have proven our project management capabilities in the field of EFB solutions: Our team is applicable for the overall planning, consulting and realization of EFB projects.

Our approach is a pro-active monitoring and alert process. We offer this important high-level support to our customers for the best availability and running of Logipad systems. We also offer regular reviews with the customer for optimizing the Logipad process and planning new steps.

Traditional EFB solutions are normally customized for airlines. This implies changes to the IT infrastructure and the need for new IT skills resulting in additional costs during the ramp-up phase. Due to the increased number of mobile tablet devices, cloud-based solutions are increasingly being used as the standard for any service provided. We have started offering a dedicated EFB from the cloud model. This model hosts the entire Logipad ground infrastructure in our cloud or the high-availability cloud service Microsoft Azure.

In addition to the cloud-based environment, Logipad can be setup and implemented in the customer’s environment as well. Specifically designed for handling security policies and low bandwidth internet connectivity, this type of implementation is still required by most airlines. This option guarantees best on-site performance and, especially in complex environments, makes integration with other corporate services easier.

From our vast experience we know that there is a wide range range of different requirements to an EFB solution, and that these demands are very much customer-specific.

Above all, our customers appreciate that we have an open ear for their wishes. We listened carefully and were able to acquire comprehensive expertise. There are several customers using Logipad with different types of devices: mobile devices like Apple iPad or Windows-based tablets, notebooks or installed devices – or a combination of these within one process.

Introduction, implementation and realisation of the EFB solution Logipad

JetAviation: Less bureaucracy, but a dramatic increase in efficiency and reduction of workload

Founded in Switzerland in 1967, Jet Aviation conducts three main branches in flight services and aircraft management. One is in Asia, based in Hong Kong, one in the USA based in New Jersey and one in Zurich, Switzerland for Europe, the Middle East and Africa. The business has a global fleet of some 300 aircraft, mainly long-range and ultra-long-range business jets with which Jet Aviation operates commercial and non-commercial operations.

In terms of flight documentation, Jet Aviation was experiencing increasing levels of bureaucracy in the documentation of flight operations. There were also increased numbers of health, safety and efficiency related processes to assure that flights were planned reliably and within the minimum parameters in terms of fuel calculation, efficiency, navigation, etc. Every operator has seen an increase over the last few years in the volume of tasks, requirements and associated documentation that need to be recorded for each flight. The main drive has been to increase efficiency and reduce back-office and cockpit paperwork as much as possible in order to reduce workload. By increasing situational awareness as well as reducing workload for the crew during critical flight phases and hot-spots such as the last hour before departure, which can be very hectic for crew members, a further benefit is gained in terms of increasing safety. Combined with Jet Aviation’s very large fleet, it means that everything needs to be managed electronically: so, another of the objectives was to have a proper, well maintained, easy to use aircraft library deployable across myriad different users.

Jet Aviation decided to implement DextraData’s Logipad. As a well-recognized aviation software provider with good provenance and a respectable portfolio of clients, DextraData was able to add more value: The offer of an in-house development and support team, and that the DextraData solution is highly modular and flexible. One more consideration was that the server output of Logipad enables Jet Aviation to really use big data technologies to optimize flight planning and supply the safety management system. As the system is deployed across the Jet Aviation fleet and as it is continually used, it is generating a bulk of data from with the business can learn by using big data technology. The selection process ran for around three months but once it had been decided to use Logipad, things started to flow really well with an excellent and responsive support team.

From the operator’s side, Logipad is seen as an EFB solution comprised of an iPad application that connects to a cloud-based system which is synchronized with various Jet Aviation software tools such as the flight scheduling, SMS software, flight planning and the electronic library. All software tools are directly interfaced to Logipad via the cloud server which ensures that all iPad-based Apps are fully updated with the latest library and flight relevant data prior to the commencement of each flight. While in flight, the Logipad application assists flight crew in accessing and managing flight data and then, upon completion of the flight, they send data to Logipad;’s cloud server which, in turn, distributes that data to specific software tools in an automated and near real time process. Also worth noting is that Jet Aviation didn’t have to change any of its other systems as Logipad is able to interface with them.

Due to the pandemic (COVID-19) the main protagonists from Jet Aviation and DextraData only met in person once, before the project was initiated, to discuss the possible integration of all the information to get an idea of what was needed. However, there was little or no impact from the pandemic because the teams got to know each other quickly, had good communication points and, using Microsoft Teams, there were weekly calls during the project phase to cover any issues.

Jet Aviation established a long-term efficient and compliant paperless flight management process, using real-time data transfers, reducing workload and increasing situational awareness. A good example of that final point, increasing situational awareness, is in-flight fuel management: Jet Aviation has an electronic operational flight plan which is orders of magnitude better than a paper-based one because, every time the crew members do a fuel and time check, the entire flight plan is adjusted in real-time with the new values. It really is an effortless way to optimize the crew’s workload and increase their situational awareness.

Another real benefit is that the system enables crews to have quick access to critical information in flight. In the electronic library, for example, Logipad offers Jet Aviation’s Crew a fantastic search function that can quickly locate and present important data from all documents stored in their electronic library. The amount of information that Jet Aviation needs to use, for example, when performing a flight over the North Atlantic, is just enormous: Logipad has generated a dramatic increase in efficiency and reduction of workload. Jet Aviation was also able to eliminate multiple data entries which, in turn, reduced the opportunities for human error. Back-office efficiency has been optimized with things like the automatic pre- and post-flight data uploads for the dispatch team and the CAMO team.

Since the beginning of 2012 AeroLogic and our termin worked together on the implementation of an iPad based EFB. As the iPad had to replace the current Class 1 laptop, the challenge was to bring all operations onto the iPad. The iPad had to cover the functionality of documentation, eReporting, navigation, performance, training and briefing.

There has been close communication between the parties throughout the whole project, which influenced the Logipad development a great deal. Based on the successful implementation of the project, we have been invited by Aircraft IT to provide an overall case study on the project. It provides a detailed overview and describes the experience with all the challenges that have been met and solved during the project.

There has been close communication between the parties throughout the whole project, which influenced the Logipad development a great deal. Based on the successful implementation of the project, we have been invited by Aircraft IT to provide an overall case study on the project. It provides a detailed overview and describes the experience with all the challenges that have been met and solved during the project. 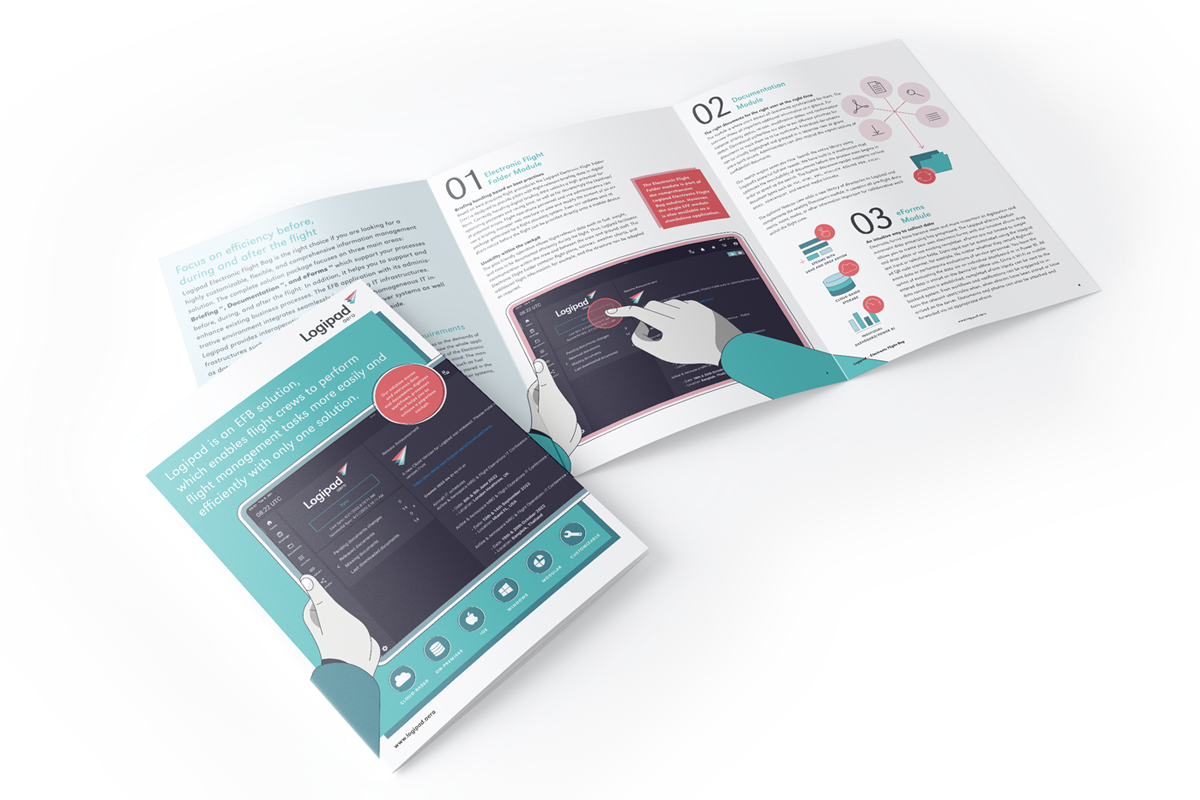 Our factsheet gives you a brief overview of the features and benefits of Logipad.

This website uses cookies to improve your experience while you navigate through the website. Out of these, the cookies that are categorized as necessary are stored on your browser as they are essential for the working of basic functionalities of the website. We also use third-party cookies that help us analyze and understand how you use this website. These cookies will be stored in your browser only with your consent. You also have the option to opt-out of these cookies. But opting out of some of these cookies may affect your browsing experience.
Necessary Always Enabled
Necessary cookies are absolutely essential for the website to function properly. This category only includes cookies that ensures basic functionalities and security features of the website. These cookies do not store any personal information.
Non-necessary
Any cookies that may not be particularly necessary for the website to function and is used specifically to collect user personal data via analytics, ads, other embedded contents are termed as non-necessary cookies. It is mandatory to procure user consent prior to running these cookies on your website.
SAVE & ACCEPT